Instead: Tell Me What You Actually Want Me To Do 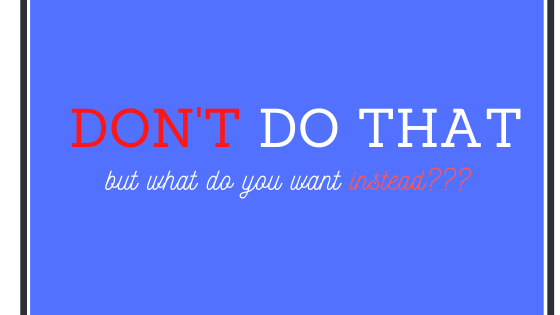 ‘Don’t do this, don’t do that,
don’t be such a stupid prat’
But what do you want me to do instead?
My mind goes blank, my brain goes dead

But if you only tell me the ‘nots’ and the ‘don’ts’
Then all you’ll likely see is dramatic ‘I won’ts’
You need to spell it out to me
Make it as easy as A, B, C

If you don’t want repeated angry eruptions
Show me how to take calm simple actions
The choices of posture, of tone, of word
Showing me I will be better heard

Or if that group I’m hanging with
Is leading me to fall through the legal sieve
Show me alternate places to make new friends
A club, a group, where positivity wends

That way you are showing me I’m not fundamentally bad,
Where ‘Don’t’ is read as you ‘wrong’un lass or lad’
You care enough to show the instead
That change is possible; good choices will grow if fed

For the shame inside, the belief I’m rotten to the core
Stops me from opening that alternate door
So your implicit belief that I can get it right
Shrinks the shame with a blinding shard of light

And when I do try to change, the emphasis will be sewn
The positive rather than the negative the dominant tone
I won’t start obsessing on the don’t instead of the do
Which makes it more likely I’ll fall in the relapse goo

The instead is the possibility, the hope, the dream
I can’t imagine for myself for my self-belief is so lean
So show me alternates, take me, persist
And the ‘won’ts’ can become ‘wills’, on this I insist.