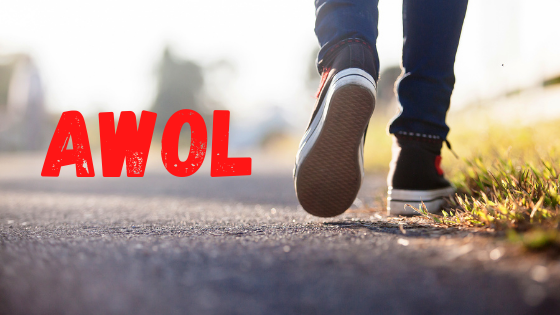 If there’s one thing that troubled teens do well, it is going AWOL- disappearing without trace, no note, no message, no nothing. They fall off the radar for a while, but usually they pop up again, maybe a day, a week or even later, often by being found by the police, turning up at a relative’s or returning of their own volition.

So what’s up with this? Why do they do this? Is there anything we can do to stop them doing this in the first place, or to get them to return sooner?

I’ve spent the last few months pondering this one a lot. And why? Because I have been doing my own 30-something version of AWOL with Teenage Whisperer. I disappeared. No posts, no Facebook posts, no new Tweets. Emails just stacked up. No message, no explanation.

It’s behaviour I regret. It’s behaviour I have thought about each and every day and have felt guilty about. But even knowing this has delayed my tail between the legs return. I know I’ve been needing to ‘get in touch’ with you, let you know what’s been going on, but I never got round to it. I couldn’t face it. I knew what needed to be done. I knew that it would be so much better if I did what needed to be done. I knew it wouldn’t take long. But still I didn’t do it, for which I am sorry.

As unacceptable as my behaviour has been, and as sorry as I am for it, it has been a useful process, for in my AWOLness I have come to better understand and empathise with teen’s AWOL episodes. As I said in my post Windows of Experience: How to relate to troubled teens,

“Relating to the teens in front of us is about emotional connection with them and is not dependent on us having been through their life experiences (thank God). We don’t have to have experienced the same level or complexity of emotion. What we do need is a reasonable level of personal emotional awareness and an ability to use those emotional experiences to give us windows of understanding into theirs.”

What is going AWOL about?

In a word, fear. It’s a primal response that causes us to go and hide. It might not be fear that a lion is trying to eat us, but it is usually one of the following:

When a lot is happening in life, particularly emotionally and physically taxing stuff, it is easy to become emotionally and mentally exhausted. For a young person it could be having to daily process and even still daily experience abuse- sexual, physical, verbal. It could be having to deal with the grief surrounding the death of a loved one. When you then pile on the emotional load of having to come to a session with you, to talk about themselves, it can all become too much. So in order to survive and to be able to cope with life they cut something out, and often that will be you.

When people make mistakes, it is quite common for them to be so ashamed and annoyed with themselves that rather than stand in the light where the blemish can be seen and sorting it out, they decide to hide away in the shadows. Instead of ‘fessing up and being able to move on, they hide.

After making a mistake, young people are often scared of your response, a parental response, a court response. Often this is because they think that your judgement of them will be as severe as their own judgement of themselves. Although they might act all blasé, they often are deeply deeply ashamed, adding more fuel to the fire of the desperately low opinion they have of themselves. ‘I’m useless, I’m never going to sort myself out’.

In my work with young offenders, fear of judgement was a classic reason for an AWOL episode, particularly if they had been doing well up to that point. They fell off the law-abiding wagon and experienced such deep shame that they couldn’t bear to face me and to admit it. End result is that they went AWOL for long periods and ended up not only being eventually found and arrested for a new offence by the police, but usually with a breach of supervision court order in addition because they hadn’t turned up to their sessions with me. The latter could completely have been avoided if they had kept in contact with me. Ironically the new offence was often of a much more minor nature than the breach of the court order.

On the face of it, hiding is easier than having to do work. Why would you go to sessions that cause you to have to examine yourself and your thinking when you can just hang out with your mates? This is just as applicable to adults who avoid seeking the treatment or therapy they need to help them with an addiction or a relationship issue.

Underlying all this hiding (in plain sight often) is a fear that they don’t have what it takes to fix their behaviour, their mistake. And the longer they think like this, the bigger the mistake becomes and the more unfixable the problem seems. It’s behaviour that has its own little vortex, and trust me, it’s easy to get sucked right in.

This is the most obvious cause of an AWOL episode and is in many ways the lion trying to eat you. It reminds me of the lad that had a drugs gang after him and was later found camping on some wasteground. He was living in fear of his life, so rocking up to our office was not a top priority. Or it could be the abusive new boyfriend that Mum has and they just can’t take it any more.

SHAME & GUILT ABOUT HAVING GONE AWOL

They’ve done it, they know they shouldn’t have, but they’re embarrassed to admit that so they hide because it’s easier. This may be added to the guilt and shame about the fact that they have done something they shouldn’t have done (e.g. committed an offence) which caused the whole AWOL episode in the first place. And the longer they hide, the more shame and guilt they feel, therefore making it all the more important that they hide some more.

If the reason for going AWOL was that they felt overwhelmed, the feelings of shame and guilt about going AWOL do not improve the situation. In fact, they make them feel more overwhelmed and exhausted so they are even less likely to resurface.

The longer they are away, the easier it becomes to compartmentalise this inappropriate behaviour and forget about it. They therefore engage in shame avoidance. In fact they make themselves so busy that this compartment is as small a part of their lives as they can manage. They hide from their emotions as best they can.

Unfortunately, if the reason for going AWOL was some inappropriate behaviour, they are then more likely to engage in some more of the behaviour to distract themselves. It seems completely wonky to go and make the situation worse, but this is people acting on emotions and on a very narrow view of the situation. This behaviour has it’s own logic and as it is based on false assumptions it leads to the wrong, not the right actions.

Take Daniel. Daniel is in care and has been repeatedly abused, sexually, physically and emotionally by those who have been supposed to be caring for him. You don’t definitively know this, but you have your suspicions, He escapes from this hell by nicking cars and joy-riding. He has been convicted and has to work with you for a year. He has been engaging well with you, hasn’t been offending and you feel you are getting somewhere with him and feel he may be close to disclosing something about his past. Problem is, he is scared s***less about sharing. It’s the fear of the unknown. This isn’t necessarily a conscious fear, it’s bubbling beneath the surface.

So he nicks a car one night to try and escape these emotions. Problem is he then feels ashamed and annoyed with himself. What will you think? ‘I’m such a loser’, his sub conscience says to himself. (Wrong assumption). So shame stops him from showing up to sessions. The longer he stays away, the worse he feels about staying away, but he just can’t make contact. Subconscience says, ‘Now I’ve robbed a car and breached my court order. My worker will be so angry. I’m such a dick’. (Wrong assumption). He gets so churned up about this that he robs another car to avoid these feelings, and on he goes until he gets arrested.

Levels of self-awareness regarding these sorts of feelings may vary; they may be simmering subconsciously beneath the surface or may be clear and conscious. Either way there are false assumptions, negative emotions and emotional avoidance tactics driving a continuation of the behaviour.

FEAR OF BEING FOUND

For those that are on the run due to a fear of someone, the decision to stay in hiding is self-explanatory. They live in real fear of being found.

So the next time someone goes AWOL seriously consider why. By doing this you will be better equipped to find and re-engage them. 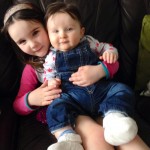 And the reason for my extended AWOL episode? I was overwhelmed, had a fear of inadequacy regarding my ability to successfully balance my life, and got sucked into an AWOL vortex of shame and guilt for not having let you know where I went.